We’ve pulled the cPanel mobile apps from the store, but retained these posts for historical accuracy

The month of June is all about putting the finishing touches on version 66, and getting started on version 68. Version 66 hit Feature Freeze last week (take a look at this post about the cPanel Development Process if you aren’t sure what that means), so we know what features will and will not be in version 66. We went into planning for version 68 just a few weeks ago, and our teams are starting work on that as well. Two versions in development while ramping up planning the cPanel conference means we have a whole lot to talk about. Let’s start with a quick rundown of some of the things I’m most excited about that we didn’t talk about last month. 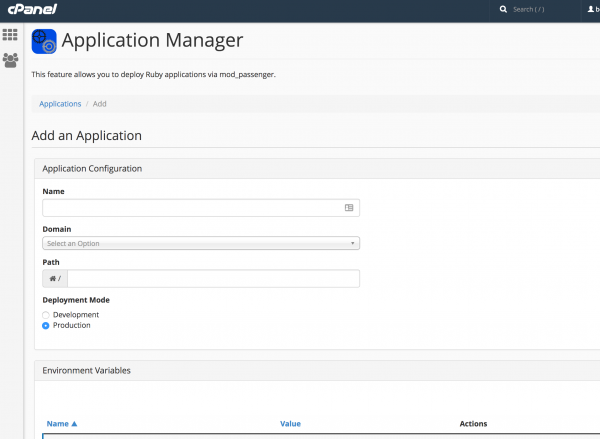 If you develop Ruby applications, this feature is built specifically with you in mind. Take a look and let me know what you think of it in a comment below, or by sending me a tweet or an email.

AutoSSL is one of the most widely adopted features we have, and we want to give more control to the cPanel user. With version 66 cPanel users can choose to exclude their domains from AutoSSL inside the SSL/TLS Status interface of cPanel.

WHM users will also be able to manage those settings, either through cPanel or by using the related API calls on the command line. Another widely requested feature is the ability to prevent certain domains from being issued SSLs through AutoSSL as a root or reseller user. If you are interested in that, definitely vote and share your use-case there!

PHP-FPM enabled by default, conversion for all accounts, and config scripts

We’re continuing to improve our PHP-FPM support in 66 by adding two new options. First you will be able to set PHP-FPM as the default PHP handler, rather than having to manually enable it after account creation. This includes a dialog box in the interface that helps root users. Second, we’ve added an option in the WHM interface, an API call, and a flag to the command line php_fpm_config script for converting all of your existing accounts to PHP-FPM with Apache.

We’ve also added a new php_fpm_config script. After any manual edits to the PHP-FPM configuration files, run /scripts/php_fpm_config to install those configuration files. You can also use this script to troubleshoot problems in the FPM system. The obvious next step is to be able to more easily configure a wider range of PHP-FPM settings on a per-account basis. To keep tabs on when we do that, subscribe to this feature request: Enhanced PHP-FPM Configuration.

With version 66 we’re rounding out the EasyApache 4 Profile Management in WHM. You can now easily convert your existing EA4 build into a profile, upload a profile that you have, and download any EA4 build profile on your server.

Over the last couple releases we have been making significant progress in reducing WHM’s reliance on frames. In version 66 we have eliminated the last few completely, which is making WHM on mobile devices much easier to use, and significantly improving the experience in the cPanel App (now in both iOS and Android). Many plugin developers are working with our team to get things updated and working correctly in a frameless WHM UI. Our UI team is taking a little break from making changes to WHM in the 68 development cycle to let them catch up, and to address any bugs that come up as part of this big back-end change.

There are a couple extra things that we were able to fit into cPanel & WHM version 66 as well, which will hopefully reduce the reliance on mouse clicks for some of our users.

First, a large portion of cPanel & WHM servers are only hosting a single cPanel account. Historically, even in those situations many of the WHM interfaces that would make you choose that account before being able to proceed with the next step. Those WHM interfaces no longer prompt for you to pick a user if you’re on a server with only one user.

The existing keyboard shortcuts in WHM are also being expanded in version 66, and will include the collapsing and expanding of the sidebar in WHM. It’s pretty slick. 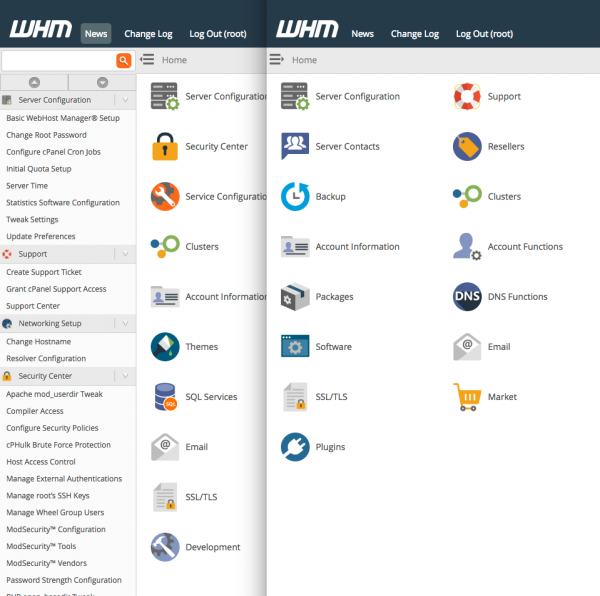 We only have a few new deprecations in version 66, but I want to make sure we talk about them.

I also want to remind you about two that are slated for version 68 (expected out in around 4 months), that we told you about in the March Development Update:

One more thing to mention: In version 60 we deprecated the CGI Center in cPanel, and in 64 we removed that feature. In 66, we’re going to remove the /usr/local/cpanel/java-sys directory and the code inside it.  This was part of the CGI Center that never got removed.  This specific removal should have a very minimal impact, because most modern browsers don’t support the applet tag. The underlying API calls will be changed to return an empty span tag instead of an applet tag, to prevent any code errors on the existing websites.

Today is the last day to take advantage of the 50% off early-bird registration rate for our 2017 cPanel Conference in Fort Lauderdale, Florida this September. (Note: There’s still time! This discounted rate has been extended to June 30th!) We’re already blown away by the number of people coming this year. We’re quickly approaching 100 registered attendees (which doesn’t even include the cPanel employees that we’re taking). The excitement is awesome, and we’re looking forward to it!

That’s all I have space to share this month, but certainly not all I wanted to share. Next month we’ll catch up on how version 66 is going and start talking about what we’re planning for version 68. As always, we’re all ears! Let us know what you think of the new version of cPanel & WHM, and what you’d like to see in the future!

Today’s Dev Update was composed to the soundtrack of Alexander Hamilton. For a fun twist, listen through the entire two-disc set the first time without noticing that you still have random play enabled.

The Apache Log4j exploit and how to protect your cPanel server

VARCHAR vs. TEXT for MySQL Databases